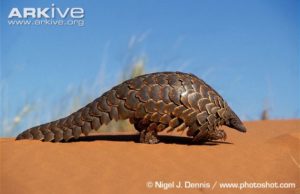 Also called scaly anteater. A mammal with short legs covered in brownish red over-lapping scales making it look like a pinecone on legs. Only the underside lacks scales. It has a long scaled tail and 5 long curved claws on each foot. In case of danger, it rolls up like a ball, only exposing hard scales. Its head is small and pointed with very small eyes, and it has a long sticky tongue for catching its diet of ants and termites, tracked down at night by smell. Young pangolins are taxied around on the tail of their mother. The pangolin is at home in Asia’s and Africa’s forests and savannahs. Back in Eocene, pangolins also inhabited Europe. Now, several of the 8 species are endangered due to the fact that pangolin scales – consisting of the same stuff as your fingernails – are used in Chinese medicine. Pangolins are considered to be the most frequently trafficked animals in the world.